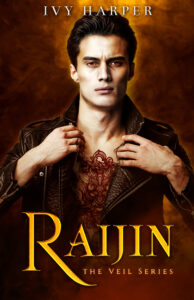 A hungry ogre. A witch divorcee.

Raijin didn’t know making a deal with a demon fox would land him the role of council dog for five years, but he’d prefer that to being locked up for another hundred years in the notorious bowels for a crime he committed. Spending his days hunting down enemies looks to be his future until he and three others are called back to Veil City.

A new murder with a business card attached invites an investigation into a witch owned club. Infamous for it’s clientele and services. Raijin is ready to get their job over with until a pair of soft lips, brown skin, and deep mahogany eyes distract him.

Sabina Clark hadn’t thought her future would involve handing in divorce papers and moving back to Veil City. The home for magic folk and monsters alike, but there she was. Not only back in her home city, but fighting demons in alleys. All in a days works for a witch trying to get her life back on together.

What she wasn’t counting on was the larger than life ogre who shows up to play her prince charming or the secret hex she finds herself cursed with.

Raijin doesn’t deserve having her in his life, but there’s no way he won’t claim her.

One bite at a time